Our laboratory investigates altered nerve functioning in diseases and syndromes including 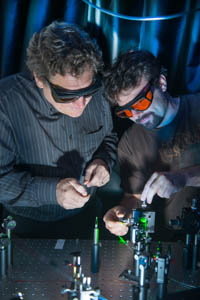 Our research focuses on the physiological, pharmacological and anatomical bases of synaptic transmission, with a particular emphasis on cellular substrates of pathological conditions in the Central Nervous System (CNS).

We use a wide array of approaches, including:

The lab is also actively involved in the development of novel photonics techniques, including

We developed a preparation to allow recording from live spinal cord slices, which we used to understand the development and organization of inhibition in the sensory spinal cord. More recently, we identified a novel molecular substrate for pathological pain: a signalling mechanism from neuroimmune cells (microglia) that controls chloride homeostasis in the spinal dorsal horn. These discoveries opened new avenues for the treatment of chronic pain and led to four patents on the development of novel analgesics [Nat.Med. 2013] and the creation of a start-up company, Chlorion Pharma.

We are interested in developing novel cellular imaging and photo-control approaches, drawing from advances in the fields of photonics and nanotechnologies, for application in biomedicine. Particularly notable are the development of a monostructure microprobe for simultaneous optical and electrophysiological recordings in-vivo (LeChasseur Y et al., Nat Methods 8:319-325) and the design of an adaptive movement compensation for in vivo imaging within moving tissue (Laffray S, et al., PLoS ONE 6:e19928). 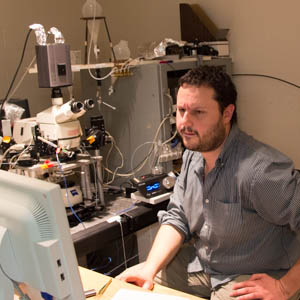 We identified several potential synaptic substrates of cognitive dysfunction associated with aging.  These include an imbalance towards inhibition, exaggerated synaptic activity and impaired cholinergic input in different areas of the neocortex.  The findings suggest that intervention aimed at balancing, rather than just enhancing synaptic activity may be a viable therapeutic strategy to improve cognitive function in unsuccessful aging or in Alzheimer’s disease (Bories C, et al., PLoS One 7: e46111; Bories C, et al., J Neurosci 33:1344-1356). 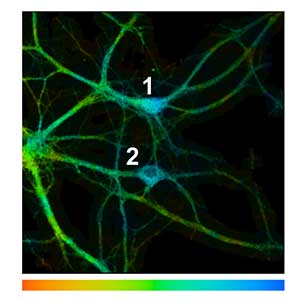 1) Demonstration that the ability of neurons to achieve gain control of firing rate is critically dependent on membrane noise produced by on-going synaptic input bombarding the cell.

2) Demonstration that neurons can switch from integrators to resonators when bombarded by synaptic activity comparable to that seen in intact networks (in vivo).

View the overview page or click on a theme title to view key publications.